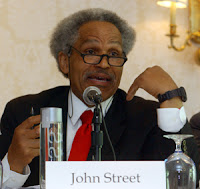 Today is Monday, May 21, the 141st day of 2007. The murder rate in Philadelphia continues at a record pace.

Philadelphia residents picked the Democratic nominee for mayor last week. The November election is a formality. Michael Nutter will be the next mayor. But he won't take office until January 2008.

There are 224 days left in the year. Odds are that at least 224 more Philadelphia residents will be murdered in 2007.

The death toll so far is staggering. As of today, 156 Philadelphia residents have been murdered. The death toll climbed by three over the weekend. (The death toll for the same time last year was 142.)

Nutter campaigned primarily against the record of the current mayor, John Street, arguable the worst mayor of any big city in the U.S. (although maybe Ray Nagins in New Orleans is up there, too).

Nutter promised a get-tough policy on criminals. Something Mayor Street and his police commissioner have been unwilling to consider so far, as they keep pushing for gun control and hundreds of millions in state money to hire more cops.

Gun control is not the answer. The people shooting up the streets of Philadelphia didn't buy their guns legally and won't take the time to register their firearms if new laws are passed. As for more cops, it might take two years to hire and train additional cops. That means at least 800 more body bags will be needed for Philadelphia murder victims.

It's a shame that Mayor Street can't be forced out of office early and allow Nutter to take over. That might prevent the deaths of hundreds more Philadelphia residents.