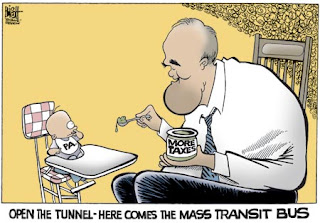 I know a professional couple who live in suburban Philadelphia. Their home, in an exclusive community, is assessed at more than $500,000. They commute to Philadelphia for high-paying jobs. Their combined annual income is $200,000.

The husband drives into Center City Philadelphia while the wife takes the SEPTA train into the city. They can afford two cars, but don't need a second car. No car payment, no insurance, no maintenance costs.

I don't know how much the train ride into Center City costs, but let's say it's $5 a day. Can a family making $200,000 a year afford to pay $10 a day to get to work? I think they can, but why should they when Pennsylvania taxpayers pick up the tab?

I help subsidize this well-off couple to get to work every day with my tax dollars. This is why I can't get excited about all the doom-and-gloom predictions by transit agencies like SEPTA that it will have to reduce service and raise fares.

That's a load of horse manure. There's a lot of professional people riding subsidized trains to their six-figure jobs. That's a dirty little secret Rendell doesn't want you to know.

Rendell claims ridership has grown significantly in the past four years. Then, why aren't the state's mass transit systems operating more efficiently? If they have more riders, paying more fares, where is the money going?

Nobody is offering to help subsidize my ride into work or pay for my parking. Gas prices are at an all-time high. Why doesn't Gov. Ed Rendell eliminate the state tax on gasoline to help working people? That would cut gas prices by 30 cents a gallon right now. Toss in a cut in the federal gas tax and the price at the pump goes down by 50 cents a gallon.

Next time you hear SEPTA or BARTA or LANTA or CATA or any of the state's other mass transit systems beg for more tax dollars, ask them to produce numbers on how many of their riders are high-income earners who enjoy taking the rest of us for a ride.

I see empty buses driving around all the time. This doesn't make economic or environmental sense. If the transit agencies can't justify a route, cut it. If nobody rides the bus on Saturday, park it. Let the guy making $100,000 a year pay more for his train ride.

Two years ago, Ed Rendell diverted nearly $500 million in federal highway funds to keep SEPTA afloat. The agency burned through the money and now wants another handout. Why would you give the same people who failed to make any changes to make the agency economically responsible more money? Has SEPTA cut any of its patronage jobs? Is it giving executives bonuses even though they can't operate the system in the black?

Subsidies to transit agencies is another form of welfare. The person on the receiving end will never get off welfare as long as the government keeps handing them money.

The best thing that can happen to mass transit in Pennsylvania is to cut service and raise fares.

Tony , Every time I read a column written by you I cringe!!! You are so out of touch with the american people. The fact that you have a car and can afford the gas to drive it , does not mean every one is in the same situation. Public transportation is just what it says, for the public! Its for people who can't afford a car or may be a student going to school in Philadelphia and can't affford a car ,let alone find a place to park. Public transportation is the most economical way for people who live in large cities to get around. Think of the traffic jams and pollution. Drive down 422 on a weeekday at 8;00 in the morning and see what I mean. If it's like that in MONTGOMERY COUNTY think what Phila. would become. Public services are becoming obsolete by the republican party.First it was the phone service. It was broke up to be more competetive. Has your phone bill gone down? Services that were once free are now billed and the Govt. expects everyone to have a cell phone. The post office is next. The Gov't. expects every family to have a computer. They should just E mail their bills . There goes another service oriented system that will now be out for profit. It would be a shame if I was a soldier in Iraq and couln't write home because there wasn't a computer. Its not cheap to access the Internet and now the bill co. wants to charge extra for a mailed bill. What happened to Universal service pay.

I enjoy sharing comments from the far left because it shows how out of touch with reality liberals are. We've been subsidizing mass transit systems for the past 40 years and where has it gotten us? A lot of politicians and their cronies have gotten rich. A lot of union bosses have gotten rich. Liberals don't want to answer that question because they know the answer is that taking money from the middle class to subsidize other segments of society is all liberals understand. And if "Scott" has actually read my column, he would have noticed that my beef is subsidizing the rich. Why should middle class tax payers have to pick up the tab for a somebody to get to his $100,000 a year job?

We do need Mass transit, but not in the form it presently exists. I would cut many bus routes and better organize the trains. I am amazed by some of the routes that are presently running, with fewer than an entire busload in a day! Septa's own numbers show how poorly organized and managed it is!
Riase therates, make an all day pass $7, and a monthly $200, and do away with little used routes, and cut the payroll. Maintain the routes that have traffic, and quite playing politics by keeping unprofitable routes that get votes. Someone needs to make some hard choices, and we start by telling the state legislature to cut off the money!

As a former resident of the Philadelphia area and a current resident and commuter in New Haven/Fairfield Counties in Connecticut, I respectfully take issue with your statements about the mass transit “swindle.” I will agree with you that SEPTA is not a well-run transit authority by any stretch of the imagination—now as a monthly rider on the Metro North, SEPTA’s deficiencies have become painfully more obvious whenever I travel back on the R5 to visit my family. Could the system be more efficient? Like most organizations funded by the government in some way, the answer is, of course, yes.

That said, I’m not quite sure how you can cast judgment on a situation when you yourself admit that you are not educated in all of the facts surrounding it. One anecdote from an acquaintance is far from being representative of the entire population, and does little to help your point—because you have presented no comparative information, how large is that “segment” you claim is wealthy enough to pay more for commuter train tickets? How large is the segment that can barely afford monthly passes now, but have fewer alternatives? What about those who choose to submit their lives to the whims of the transit schedule (believe me, this is generally the case) so that they don’t have to waste time sitting in traffic, or because they want to reduce their personal impact on the environment? Until we have some quantitative measure of how big any of these groups are, how can we analyze this situation and come to any educated conclusions? In short, how accurate can you be in saying that transit somehow subsidizes the rich if they only contribute an insignificant portion of the entire riding population? I’m not saying you’re necessarily wrong; I just don’t think you have the evidence to back up your claim justly, only going by what is presented in this one entry.

You mention the ever-escalating prices of gas, and complain that drivers are not getting any government help in easing those prices. The simplest way to not spend as much at the pump? Drive less. Since I’ve started commuting, I went from buying a tank of gas every week (if not more) to buying once or twice a month. The added bonus: when my much-more-liberal-leaning, BMW-driving colleagues and friends start harping on “An Inconvenient Truth,” I can stick it to them by saying that I’ve significantly decreased my environmental impact by drastically reducing the amount I drive everyday, thereby decreasing emissions. That, unsurprisingly, tends to shut them up quite effectively.

My apologies for length--these just happen to be two issues I'm quite vocal about.

Nearly $8 out of every $10 in non-subsidized revenue that SEPTA takes in is from the City Transit Division - i.e. city subway lines and city buses and trolleys. Thus, most of the ridership is also city residents, not your suburban friends.

Also, it's called federal highway funding for a reason. Those very roads you love are also subsidized, through taxpayer money from me and others who would rather pay for transit...Nice life