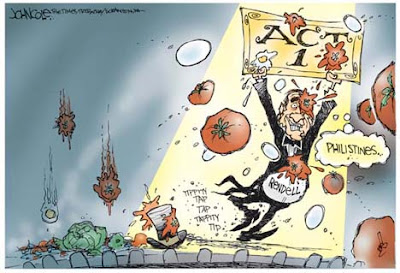 Below is a terrific Letter to the Editor published in the Sunday, May 27, edition of The Mercury. The writer is David Baldinger, who is involved with the Pennsylvania Taxpayers Cyber Coalition. It's one of the most succinct assessments I've ever read of the problem with our state government. It's worth sharing with as many people as possible.

American writer Rita Mae Brown defined insanity as "doing the same thing over and over again and expecting different results."

Governor Rendell has proposed a 1% sales tax increase, a portion of which would be used for a small amount of property tax relief.

The House Democratic caucus recently proposed a 1/2% sales tax increase to be used for a small amount of property tax relief.

What makes the politicians think that these latest ideas are any different than the Act 1 referendum that the voters so resoundingly rejected on Election Day? It proposed an income tax for a small amount of property tax relief.

All of these proposals are exactly the same: They impose a new, permanent tax in exchange for temporary "relief" that will be offset very quickly by increasing property taxes.

If Brown's definition is correct, what does this say about the sanity of our lawmakers?

It is time that the powers in understand that voters clearly recognize their phony shell games for what they are and that only genuine property tax reform through elimination is acceptable.

If they refuse to learn this lesson now, we’ll have the opportunity to teach it to them in 2008.

The editorial cartoon above is by the brilliant John Cole of The Times-Tribune in Scranton. To view more of Cole's cartoons, go to http://emedia.thetimes-tribune.com/JohnColeCartoons/tabid/407/Default.aspx