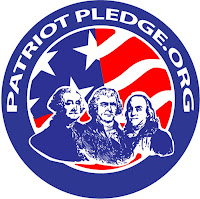 The Patriot Pledge (www.patriotpledge.org) is an oath demanded by the people of all candidates running for elected office within the Congressional branch of the federal government. It is an oath each candidate signs committing him or her to the following:

* I will not serve within the Congressional branch of the federal government for more than 12 years.

* I will have a complete understanding of every provision of a bill prior to casting a vote in favor of it.

* I will spend the government's money as prudently as I would spend my own money, recognizing that each dollar the government spends was taken from a working citizen or borrowed against our future.

* I will not accept any health or retirement benefits after departing Congress provided to me as a member and will work to pass legislation ensuring Congress is part of the same social security and health benefits system provided to common working class Americans.

* I will record and post transcripts or videos on the internet of all meetings I or my staff hold with any lobbyist (or former congressmen) while serving in the Congress and I vow not to become a lobbyist following my tenure in Congress.

Read more at the link below: