Guest Column: I trust Sam Rohrer with my future 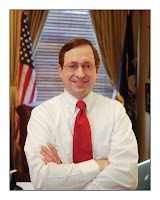 I suppose it is time I explain the reasons that I support Sam Rohrer to be our next Governor. The journey over the last few months has inspired me, and has shown me that there are those in the political realm who are still fighting to protect my future, as well as the futures of my family, friends, and neighbors. The latest poll showed that 66% of Republicans do not know who they are voting for on May 18th. Therefore, please allow me to help you make an informed decision.

The first time I talked with Sam was through e-mail. I was looking for information and questioning the possibility of internships. For those reasons, I emailed him asking to arrange a meeting. He welcomed me, and I met him a few weeks later in his office. At our meeting, we discussed the current issues challenging Pennsylvania. He held principle above party and that was quite obvious, despite my being so young at the time. I visited him again and he continued to inspire in me the need to serve.

In his current undertaking of running for the highest office in our Commonwealth, that of Governor, I have been working diligently in explaining Sam’s vision for a brighter and greater Pennsylvania to the students within the state. This has been a challenge; but I feel it is a worthy cause. I believe Sam will protect and defend my rights as a free citizen of this country. Every night, I can sleep with the fact that I know he is there working for me. Once the students of this state hear his message, they too will know that they need to vote for Sam.

What specifically makes Sam stand out as the best candidate for Governor?

For more information about Sam's goals, please visit www.samrohrer.org As you can see, Sam knows the issues that affect Pennsylvanians. He stood up because he was called on to do that which is necessary to ensure the government of Pennsylvania is renewed and reformed so that it will serve we, the people, once more.

"This campaign is more than a challenge to old politics - it's a fight for the survival of constitutional principles. This has been the cause of my life, and it will be the focus of my administration." - Representative Sam Rohrer

Sam is also helped by so many who believe in him greatly. Take a look at the statement on his Web site:

"SamRohrer.org is a movement of citizens. More than organizing for a single candidate or political party, the aim of this campaign is to lay the foundation for a stronger, freer Pennsylvania.

We believe that it is the duty and charge of every elected official to diligently pursue restrained, responsible, and ethical government.

We believe that lowering taxes, restraining spending and removing old regulatory barriers is the proven formula for economic growth.

We believe that academic excellence thrives when parents have greater choice and control over the educational decisions of their children.

We believe that it is the responsibility of government to defend freedom for homeowners, working families and risk-taking entrepreneurs.

We believe that defending vulnerable life and safeguarding the institution of family is a charge and responsibility for our generation."

I know the people working for Sam are not in this to take over the Governor's Mansion, but to bring an administration of principle back to Harrisburg -- back into the executive branch of Pennsylvania, as principle has been absent for almost a full eight years under the current administration.

I believe in Sam. I believe his vision is that which is needed for our Commonwealth. We need to once again hold the title of "Keystone State" proudly. We, as a state, held the other states together at one time. Over time, that strength has tarnished and diminished greatly. With Sam's becoming our next Governor, he will ensure that we are the greatest and strongest state again!

We live in a volatile political climate; but, with Sam's experience, his dignity, his passion, his conservative principles, he will be the greatest Governor for whom we can ever hope.

I am ready to trust him with my future and my life … are you?

For liberty, freedom, and independence,

Wesley Stefanick is the statewide director of SAMForce, the Student Action Movement to elect Sam Rohrer governor of Pennsylvania. For more information log on to www.samforce.us