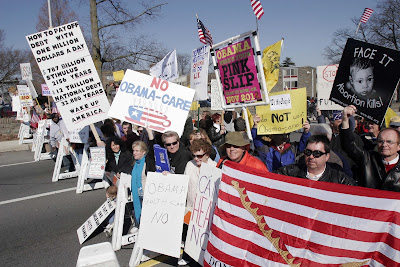 The Democratic Party is scared to death of the Tea Party movement - and it should be.

From The Washington Post's insightful political blog The Fix by About Chris Cillizza:

1. Craig Varoga, a longtime Democratic political operative, has formed a group -- known as Patriot Majority PAC -- with the specific goal of keeping tea party candidates out of office.

"Americans need to confront the dangerous ideas of the tea party movement head on, without any fear, before they gain any additional traction in the legislative process or the 2010 elections," said Varoga, who managed former Iowa governor Tom Vilsack's 2008 presidential run.

The idea behind Patriot Majority PAC is to pick 12 to 15 races where tea party-affiliated candidates are running then launch a barrage of television and radio ads (as well as online targeting) to keep them from winning. The funding, according to Varoga, will come entirely from individuals and thanks to a ruling in U.S. District Court last week the group will be able to expressly advocate for the defeat of candidates.

(Varoga also hopes to establish Patriot Majority as a clearinghouse for information -- on the negative side of the ledger -- about the tea party movement. "We are asking all Americans to join us and oppose the extreme tactics of the tea party and the dangerous ideas behind them," he said.)

While Varoga has yet to identify his targeted races, the first real test of the power of the tea party movement will come May 18 in Kentucky where ophthalmologist Rand Paul, a favorite of the tea party crowd, will face off against Secretary of State Trey Grayson who has the support -- whether public or implicit -- of the vast majority of establishment Republicans in Kentucky and nationally.

A victory by Paul would give further legitimacy to the power of the Tea Party movement -- and could potentially endanger other Republican incumbents or quasi incumbents like Grayson. It could also jeopardize Republicans' chances of picking up a bundle of seats in the House and Senate this fall.