Now that's what I call a fan 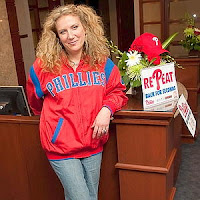 A suburban Philadelphia woman on trial for allegedly offering undercover officers sex for Phillies World Series tickets, took the stand in her defense. Judging from her testimony, many she should have kept her mouth shut.

From a story by reporter Larry King in The Philadelphia Inquirer:

Susan Finkelstein, the admittedly rabid Phillies fan charged in Bucks County with prostitution, strongly denied in court this morning that she ever offered sex for tickets to last fall's World Series.

Yes, she placed a "goofy" Craigslist ad with sexual overtones.

Yes, she e-mailed photos of her breasts to a would-be World Series ticket-seller, hoping to use her "feminine wiles" to get a good deal.

Yes, she was desperate for tickets.

But no, Finkelstein insisted, she never offered any sexual favors as part of the bargaining.

"Are you a prostitute," her lawyer, William J. Brennan asked.

Read the rest of the story at the newspaper's Web site.