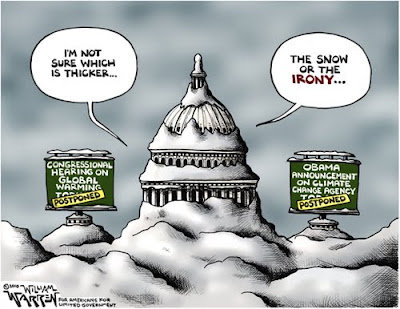 Al Gore couldn't hit water if he fell out of a boat. Is Al Gore the last person on Earth who still believes this global warming crap or is he just in it for the money?

The New York Times once again is Al Gore's "enabler", publishing a February 28 opinion editorial, "We Can't Wish Away Climate Change", despite the mounting evidence that global warming was and is a complete fabrication.

In November 2009, the Telegraph, a British newspaper, carried a story, "Al Gore could become world's first carbon billionaire", so let us disabuse ourselves of the notion that Gore just wants to save the world.

Heavily invested in the "carbon credits" scam and technologies whose success depend on people believing fairy tales about "clean energy" alternatives such as wind and solar energy, Gore has enriched himself by trumpeting the biggest hoax of the modern era.

It is no surprise that The New York Times published his latest collection of lies. The reportorial record of the Times has been decades of lies about global warming. Whatever patina of respectability it once had has been eroded by its participation in the fraud. Why should it stop now?

There is increasing discussion of whether testimony before Congress by Gore and other global warming advocates constitute criminal behavior that begins with lying under oath.