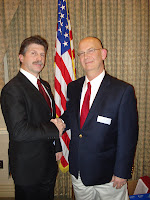 I received this amusing press release from the David M. Maloney for Berks 130th Campaign attempting to clear up some potential confusion about a candidate with a similar name running in a separate Legislative district.

Both are Republicans but Dave Maloney is seeking the nomination for the 130th District in eastern Berks County while Dave Molony is seeking the 133rd State House seat in Lehigh County and Northampton counties.

Just when you thought all politicians were the same; one difference between Pennsylvania State Representative candidates in the 130th and the 133rd Districts could be ... vowels.

Dave Maloney of Pike Township and Dave Molony of Catasaqua, are running for State Representative in two different districts here in Eastern Pennsylvania.

"I met Dave at the House Republican Campaign Committee meeting last month. It will probably be some confusion when we both get to Harrisburg, but I've got a lot more hair than Dave," said Dave Maloney, Boyertown High School alum and former Oley Valley School Board member who is the 130th District candidate.

"We don't really think that the people in Berks and in Lehigh Valley will get confused. But I will say that we do expect to get right to work when we get elected in November and are sworn into the House of Representatives in Harrisburg in January of 2011," said Dave Molony, running for the 133rd.

Dave Maloney said he see the economy and jobs as the issues at the top of the list of concerns for people. "I have never seen business this slow, people hurting so badly. Harrisburg has to knock down all the barriers to letting companies do business and hire for new jobs." He added that he "supports all efforts to eliminate property taxes in Pennsylvania and bring real accountability to public schools."

"Governor Rendell's budget increase is over two billion dollars. At the same time more people are buying less and paying less income taxes because they are laid off or working part time. How does the governor expect to spend more money when the state has less to spend and a set of huge increases coming down the road from pensions and other promises Rendell made? We need the determination to make hard choices and say no to expanding government programs and spending. It is not possible to tax people into prosperity," Maloney said.

In the photo above, that's Dave Maloney on the left, Dave Molony on the right.