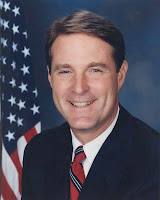 Have you noticed how there's no room for dissension within the Democratic Party?

Look how quickly the Dems have turned on their once golden boy, Sen. Evan Bayh, because he has pointed a finger at his fellow Democrats for the gridlock in Washington, D.C.

The party has been hijacked by far-left extremists -- Obama, Pelosi, Reid, who are bent on destroying the party if they don't get their way. Moderates like Bayh have no place in today's Democratic Party.

And isn't it interesting that the liberal media is still trying to portray the Republican Party as divided when it's the Democrats who are dysfunctional?

Sen. Evan Bayh handed Republicans plenty of ammunition to use against Democrats when he announced his retirement last week — and some of his colleagues are none too happy about it.

In explaining his decision not to seek reelection, the Indiana Democrat has complained publicly about legislative gridlock, saying that Congress hasn't done enough to prop up the economy and hasn't created a single private-sector job in the past six months.

While many Senate Democrats share Bayh's frustration with Washington partisanship and stalling on major bills, some are angry that he's stepping all over their 2010 message: that the 111th Congress has been one of the most productive in a generation, that the stimulus stemmed the tide of job losses and that Republicans, not Democrats, deserve most of the blame for the paralysis afflicting Capitol Hill.

"I just have no idea what he's doing," said one Democratic senator, whose face turned red as he threw up his hands after being asked about Bayh.

"We get some of the blame; we moved a little too slowly on health care," said Sen. Sherrod Brown (D-Ohio). "My only disappointment, and the only thing I'll say about Sen. Bayh, is that I think a more accurate portrayal by him was how Republicans have tried to block everything that we've done."

"It almost seems like he's siding with" Republicans, said one top Democratic aide.