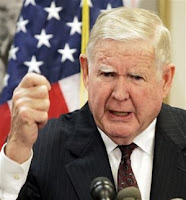 Voters in Pennsylvania's 12th Congressional District, held by the late John Murtha since 1974, can make a clean break with politics-as-usual when filling Murtha's unexpired term on May 18.

The Democrats are fielding a bunch of political retreads. Republicans are offering fresh faces.

Despite the decidedly anti-establishment national political mood, the Democratic special election field to succeed the late Rep. John Murtha (D-Pa.) has a distinctly insider flavor to it, marked by a crop of prospective candidates who boast years of experience in Harrisburg and Washington.

Former Pennsylvania Treasurer Barbara Hafer touts her years as a statewide officeholder as her leading credential. Former Lt. Gov. Mark Singel, a close confidant to Gov. Ed Rendell, heads one of the state's most influential lobbying firms. And the latest entrant into the race is Murtha's longtime district director, Mark Critz, who's running to continue the late congressman's legacy of delivering much-needed federal funds to the district.

By contrast, the Republicans are running lesser-known candidates with outsider profiles. The 2008 GOP nominee, William Russell, crusaded against earmarks and runaway federal spending and continues to hammer home those themes in his second bid for the seat. And businessman Tim Burns, whom Washington Republicans favor, is a first-time candidate who notes on his campaign home page: "My name is Tim Burns, and I am NOT a politician. I don't claim to know how Washington works because I don't believe it does."