Newspaper: The Real Cost of Obamacare 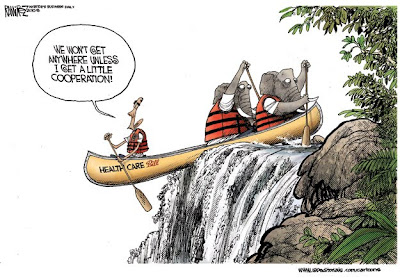 If the Obama Administration is starting to feel like the movie, "Groundhog Day," you're not far off. After wasting an entire year pushing a government takeover of health care that the majority of Americans oppose, Barack Obama is still peddling the same snake oil.

Health Reform: The linchpin of ObamaCare 2.0 is that 31 million uninsured will be covered at little added cost. But in fact, White House estimates for low costs are based on little more than accounting tricks.

The president's plan "puts our budget and economy on a more stable path by reducing the deficit by $100 billion over the next 10 years — and about $1 trillion over the second decade — by cutting government overspending and reining in waste, fraud and abuse," the White House says on its Web site.

Sound too good to be true? It is.

None of the numbers can be believed. The plan is a result of blatantly dishonest accounting for the real costs of the program, while grossly overstating its benefits. Americans should know the actual 10-year cost is closer to $2 trillion over 10 years, not the $950 billion claimed, when all the actual costs are toted up.

How can there be such a wide gap? Mainly because the president's plan doesn't provide benefits until the second half of the first decade. So it pretends that it will "only" cost $950 billion. But once the program kicks in, the full 10-year cost of benefits will be included — at a real current cost of $2 trillion or more.

Or, as columnist Charles Krauthammer, himself a trained physician, told Fox News' Bill O'Reilly: "It's a trick. The way the Democrats got under (the spending limit imposed by Obama) was by making 98% of the expenditures, the benefits that you and I would get under the bill, occur in the second half of the decade."