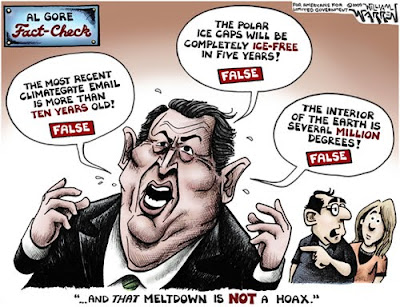 Are you gonna believe your own mind or just accept what all the smart people in the Obama Administration are telling you? Would Al Gore lie to you? Just accept that global warming is a fact ... and have some more Kool Aid.

From an article by Karen Schuberg at CNSNews.com:

Fifteen years with no statistically significant increase in global temperatures does not mean that the human race is not causing the climate to change, EPA Administrator Lisa Jackson told CNSNews.com on Tuesday.

Jackson reasserted her faith in manmade global warming in response to a question from CNSNews.com asking if she agreed with the recent statement by prominent climate scientist Phil Jones that there had been no statistically significant global warming since 1995.

On Capitol Hill Tuesday, after a Senate Environment and Public Works Committee hearing, CNSNews.com asked Jackson if she agreed or disagreed with one of the world’s top climate-change scientists that there had been no statistically significant global warming for the past 15 years.

"Do you agree with Dr. Phil Jones, the former head of the Climate Research Unit at the University of East Anglia, that there has been no statistically significant global warming since 1995?" CNSNews.com specifically asked.

Jackson responded: "I believe all the new information we have doesn’t lead to any different conclusion than what we reached in the Endangerment Finding. And that is that climate is changing and that mankind is responsible in part for that change, and that we need to move aggressively."