If Barack Obama fails today, we'll all be swept away 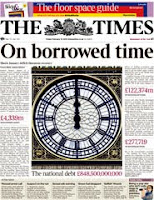 An excellent perspective on the failed Obama presidency from Anatole Kaletsky, writing in The Times of London:

You may not have noticed, but today is a very important day for US politics, world economic prospects and even for the global balance of power between Western democracy and benign dictatorship along Chinese lines. Why? Because today marks either the beginning of the end of Barack Obama's presidency, or the end of the beginning.

At 10am US Eastern Time, he will host an all-day "summit", broadcast live on nationwide TV, with his Republican congressional opponents and his wayward Democratic supporters, to try to establish some kind of political consensus on the top priority of his presidency — reform of the ruinously expensive US healthcare system. Medicine now absorbs 17 per cent of US national income, double the average in other advanced economies and half as much again as Switzerland, which has the next most expensive healthcare.

If nothing is done to change the US healthcare system, it can be stated with mathematical certainty that the US Government and many leading US companies will be driven into bankruptcy, a fate that befell General Motors and Chrysler largely because of their inability to meet retired workers’ contractually guaranteed medical costs.

Today's summit represents Mr Obama's last chance to find a way forward, either by shaming some Republicans into supporting him or by embarrassing his own perennially divided Democratic Party into uniting around a single plan. If he is unable to do this, he will have almost no chance of passing any significant legislation on any other issue —– not on energy, budgetary responsibility, macroeconomic management or even on such seemingly popular issues as bank regulation and jobs.

In short, Mr Obama has staked his entire presidency on today's summit.