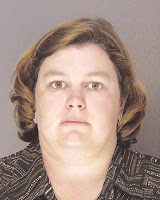 A Montgomery County woman known to friends as "the ultimate soccer mom" is headed to jail for stealing more than $75,000 from the youth soccer league for which her son once played, reporter Carl Hessler Jr. writes in today's edition of The Pottstown Mercury.

Maryann Grant, 38, of Wellington Way, Red Hill, was sentenced in Montgomery County Court on Thursday to 9-to-23-months in the county jail, to be followed by five years' probation, in connection with thefts that occurred during her four-year tenure as treasurer of the nonprofit Valley Soccer Club, which serves the Upper Perkiomen Valley region.

"These types of offenses, we call them white collar crimes, they are often committed by people who are very involved in the community," said Judge Thomas P. Rogers, referring to testimony from Grant's friends and relatives that she was a dedicated community volunteer. "But these are offenses that violate the public trust. It cannot be tolerated."

Desperate circumstances lead some people to steal, but this woman apparently used some of the money to pay for a trip to Disney World.

And despite overwhelming evidence that she stole the money, her husband and family told the judge she was railroaded by police and the judicial system. I wasn't in the courtroom, but if you're the treasurer of an organization and $75,000 of the group's funds is missing, and you're the only person who has access to the account, you're responsible for it. It's that simple.

The digusting part of this crime is the culprit refuses to admit guilt. Yet the missing money can not be accounted for. I am sure if a job were advertised where you get $75,000. with free food & lodging for six months. Must spend evenings and weekends in jail. You would have people lining up

Saturday, 11/21, Pottstown Mercury man floats $1,300 in fake deposit envelops and get same sentence as the $75,000. soccor mom. What do they do in Montgomery County Court pass out rubber stamps for sentencing?
I see two messages sent to the public:

2) Steal large amounts. In for a penny in for a pound you will get the same sentence.