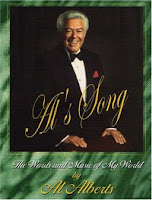 Al Alberts, who hosted a Philadelphia-based television talent-show for decades, died Friday at his home in Florida at the age of 87.

Although he was a founding member and lead singer of The Four Aces, an all-male harmony group that scored several hits, including "Three Coins in the Fountain," "Tell Me Why," and "Love is a Many Splendored Thing," Al Alberts will forever be remembered as the host "Al Alberts Showcase" which aired on Philadelphia's Channel 6 for 32 years.

His real name was Al Albertini, but with his wife Stella by his side, Al Alberts launched hundreds of careers on "Al Alberts Showcase."

Some of the biggest stars who got their start on "Showcase" include Teddy Pendergrass, Sister Sledge, Andrea McCardle and The Kinleys, a country music sister duo.

Most recently, Roberts served as executive producer and host of a syndicated radio program called "Harmony."

You can visit Al Alberts' Web site at www.alalberts.net, where you can also order a copy of "Al's Song," his autobiography and the story of The Four Aces.