What if George W. Bush had done that? 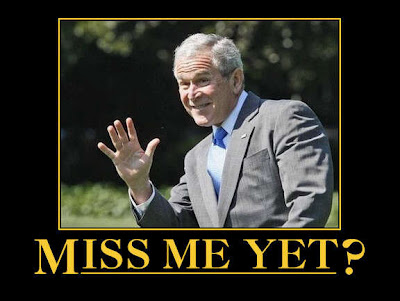 Josh Gerstein of POLITICO recaps some of the outrageous behavior of Barack Obama that has gone "unnoticed" by the state-run liberal media.

A four-hour stop in New Orleans, on his way to a $3 million fundraiser.

Signing off on a secret deal with drug makers.

Freezing out a TV network.

Doing more fundraisers than the last president. More golf, too.

President Barack Obama has done all of those things — and more.

What's remarkable is what hasn't happened. These episodes haven't become metaphors for Obama's personal and political character — or consuming controversies that sidetracked the rest of his agenda.

It's a sign that the media's echo chamber can be a funny thing, prone to the vagaries of news judgment, and an illustration that, in politics, context is everything.

Conservatives look on with a mix of indignation and amazement and ask: Imagine the fuss if George W. Bush had done these things?

What if George W. Bush had done that? - Josh Gerstein - POLITICO.com