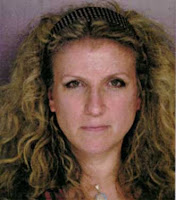 Philadelphia Phillies fans are being encouraged to show their team spirit, but one suburban Philly woman may have gone too far.

The Philadelphia Inquirer reports that Bensalem police arrested 43-year-old Susan Finkelstein after she allegedly posted an ad on Craigslist that stated she would do anything for World Series tickets.

The ad stated in part that Finkelstein "was a die-hard Phillies fan and buxom blonde in desperate need of two World Series tickets."

Police say her posting went on to say the price was negotiable and that "I'm the creative type! Maybe we can help each other!"

The woman is charged with prostitution and related offenses.

While I can't condone Ms. Finkelstein's alleged actions, this just goes to show that Phillies fans will go all the way to support their team. Take that, New York Yankes