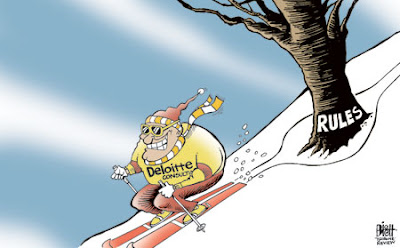 Excellent editorial in The Pittsburgh Tribune-Review about the recent audit questioning how Gov. Ed Rendell hands out no-bid contracts.

Pennsylvania Auditor General Jack Wagner didn't find evidence of crimes. But his conclusion that state officials who allowed $382 million in computer-services contracts to grow to $592 million over four years "fell down on the job" nevertheless deservedly indicts Harrisburg business-as-usual in the court of public opinion.

Deloitte Consulting -- whose PAC and employees have given Gov. Ed Rendell $29,000 in campaign contributions since 2001 -- received 42 of its 59 contracts without bidding competitively. Routine approval of change orders swelled costs. Yet General Services Secretary James Creedon, Deloitte and Mr. Rendell have the gall to defend all this.

Mr. Creedon denies any unethical behavior -- a matter that Mr. Wagner's leaving up to the state Ethics Commission. Deloitte -- which also received $2.25 million in grants to help it fulfill the contracts -- is "proud" of the "savings" it provided.

So inured are they to back-scratching mismanagement of public funds that they ignore -- or can't detect -- this financial fiasco's stench. Thank goodness Wagner -- and taxpayers -- still recognize that Harrisburg "perfume" for the noxious cloud that it is.