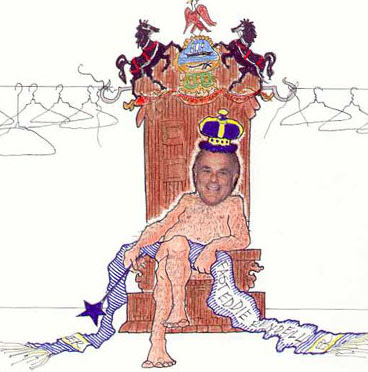 Did you catch Gov. Ed Rendell on the Pennsylvania Cable Network the other night?

If you missed the scintillating hour of television on a PCN call-in show, here's the abridged version of Rendell’s rambling remarks.

The highlight of the evening for me (the part where I nearly fell out of my chair) is when Gov. Rendell claimed he has run a tight fiscal ship of state. Did Rendell captain the Titanic in a previous life?

Yes, you heard it right, folks. Rendell had the nerve to claim that he has been fiscally responsible with your hard-earned tax dollars.

"Since I’ve been governor, I've tried to run a pay-as-you-go government," Rendell said as his nose grew about a foot. Pay-as-you-go? Are you kidding me?

What else did we learn as Rendell held court? He likes to use euphemisms for tax hikes like "revenue enhancement" and "utility assessment fee," which is a new tax on electricity he wants to impose on Pennsylvania homeowners.

Rendell is still pushing his hair-brained scheme to tax big oil although he couldn't exactly explain how he would prevent the oil companies from passing the tax on to consumers in the form of higher gas prices. At one point, Rendell slipped and told the television audience that Exxon has already notified its service station owners that it would pull out of Pennsylvania if Rendell went ahead with his new oil profits tax. What would fewer gas stations do to gas prices?

Rendell also changed his tune when he had a chance to tout his "historic property tax relief for all Pennsylvanians" line from the 2006 election campaign. He told one caller that "hundreds of thousands" of senior citizens would soon get "rebate checks" of $300 to $400 in the mail. Rebate checks? That's doesn’t sound like property tax reform to me. And what happened to property tax relief for all? Last time I checked, there were 12 million people in this state. Rendell also failed to mention that the "rebate checks" come from money borrowed from the Lottery Fund and will have to be repaid once his casino windfall comes in sometime in late 2008.

A few other highlights: Rendell pretty much guaranteed that Interstate 80 will become a toll road regardless of what happens to his efforts to lease the Pennsylvania Turnpike. But even if the Legislature approved the I-80 toll plan this year, it would not happen until 2009 at the earliest.

Rendell also threw down the gauntlet to the state Legislature, saying he's prepared to stay in Harrisburg the entire summer if that's what it takes to get his $2 billion in tax hikes. The Legislature typically adjourns for a 2½-month vacation on June 30 (but that's assuming it has an approved budget in the governor's hands).

Don't bet the house on the Republicans in the Legislature falling for Rendell's tricks this year.

Rendell also took some shots at the Legislature calling it "the greatest do-nothing Legislature in history." Ouch. There's going to be some hurt feelings over that remark.

And the governor canceled a planned vacation to Africa (where I'm guessing planned to meet up with Angelina Jolie and Bono for a safari).

"I'm going nowhere," Rendell said. "We might be here all summer. They (the Legislature) better be prepared to spend a lot of time here (in Harrisburg) in July and August."

Rendell also hinted he's planning to hold his breath until the Legislature approves his $2 billion in tax hikes. (OK, I made that part up, although he did say he'd veto a budget that didn't include everything he wanted.)

"As long as we have the money," Rendell said he expects the Legislature to fund all his initiatives.

"If I'm not going to succeed, I'm going to die trying," Rendell said.

Tony, Ed merely Misspoke. he didn't mean to call it a "Pay as you go" budget, he meant to say it was a "Pay back all my friends as I go" budget.
And he is criticizing the legislature. If he had invested %4 million dollars in the campaigns of selected house races state wide, (That's $50,000 in 100 races), instead of making sure he got an ego boosting 60% vote total, he would have had a Dem house. The reason he didn't, is because there were too many conservative Dems running who wouldn't pledge allegiance to Him and DeWeese. It is all of his own making, he should stop whining, and stop spending.