Will the real Dennis O'Brien please stand up 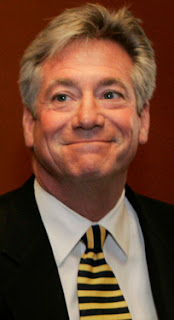 Why is this man smiling, you ask?

It took the newspaper six months, but The Philadelphia Inquirer has finally figured out that Dennis O'Brien, the Republican Speaker in the Democratically-controlled Pennsylvania House of Representatives, isn't voting with the Republicans. Far from it. O'Brien cast the deciding vote last month to rubber-stamp Gov. Rendell's $27.3 billion budget.

"Since his election, the speaker has voted extensively with the Democrats," House GOP Leader Sam Smith told the Inquirer. "Dennis wants to be in the middle, but at the end of the day you have to be either one or the other."

For more griping about O'Brien by Republicans, check out "O'Brien's speaker deal upset GOP" in today's edition of The Inquirer, http://www.philly.com/

I guess news travels slow in Philadelphia. I warned Republicans months ago that O'Brien has been voting with the Democrats for years and will dance to Rendell's tune while serving as Speaker.