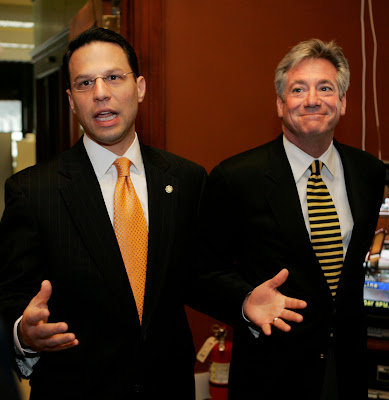 The rubber hit the road this week on Pennsylvania's tentative path to reforming state government. It appears the reform wagon has spun out of control, crashed through the guardrail and landed in a ditch, where it exploded in flames.

As many activists and columnists had feared (and predicted), Harrisburg lawmakers are not willing to make substantial changes in the way they conduct the public's business.

When the foxes guard the chicken coop, you can count on chicken for dinner. Pass the drumstick, please.

After spending months on trivial rules changes, the Speaker's Legislative Reform Commission is finally addressing the fundamental reforms needed to return Pennsylvania's wayward government back to the people.

Important reforms such as reducing the size of the legislature, term limits, campaign finance reform and open records are finally on the table. The bad news is that lawmakers like the status quo. They've worked hard to enrich themselves and exclude the public from their deliberations. Why change now?

So what if 55 of their colleagues were forced out of office by voters in 2006 as payback for the July 2005 payjacking? Two-hundred incumbents survived the purge. There's safety in numbers. Honor among thieves.

What did the Speaker's Legislative Reform Commission come up with so far?

Instead of reducing the size of the legislature, the commission came up with a plan to cut the cost of operating the Legislature by 10 percent, or about $32 million a year. More table scraps for the state's beleaguered taxpayers.

All nine Democrats and five of the Republicans on the 18-member panel killed the recommendation to reduce the Legislature's size, reports the Associated Press. Commission rules required at least nine "yes" votes from each party for a reform recommendation to move to the full House for a vote.

On Tuesday, the commission voted down a plan to impose term limits on the professional politicians in Harrisburg. Although 75 percent of Pennsylvania residents favor term limits, according to a recent poll, the lawmakers argue that it's not a good idea to restrict how long they can spend feeding at the public trough in Harrisburg.

The reform panel rejected both eight-year and 12-year term limits for lawmakers and voted against six-year terms for committee chairmen, the AP reports.

The chairmanship limits were unanimously supported by the commission's 12 Republican House members, but only five of the 12 Democrats voted for it, according to the Associated Press. That's probably because Democrats finally took control of House committees after 12 years of being the minority party. Why give up a good thing now?

The recommendation to impose term limits for legislators never stood a chance. See "Fox guarding chicken coop" reference above. But the limits on committee chairmen was seen as a major reform to end the tyrannical reign of committee chairmen, who often bottle up important bills at the behest of lobbyists.

Also on Monday, the commissioner recommended limits on statewide campaign contributions, but couldn't agree on what those limits should be. According to Capitolwire.com, a subscription-based news service that covers state government, nine Republicans and 12 Democrats voted for the campaign finance measure, which has no teeth unless specific monetary numbers are added by the full House.

A proposal offered by Rep. Greg Vitali, D-Delaware, to limit House race contributions to $500 per election cycle, state Senate races to $1,000 and statewide campaigns to $10,000 was also rejected by the reform panel, according to Capitolwire.

Money drives all politics in Pennsylvania. Incumbents like the current system, which encourages lobbyists and special interest groups to pump hundreds of thousands of dollars into the pockets of incumbents in return for favorable votes.

Genuine reform in Pennsylvania can come from only two sources: a Constitutional convention by the people to place restrictions on the political class and at the ballot box in 2008, where voters can impose their own term limits on the professional politicians.