'My name is Ed Rendell and I have a problem' 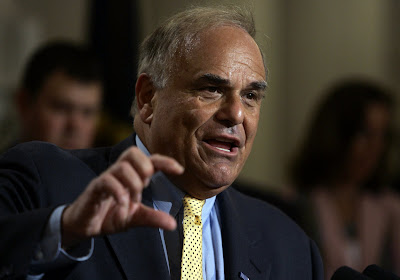 Look up the word "addict" in the dictionary and see if it reminds you of anyone.

ad-dict:
1. a person who is addicted to an activity, habit or substance.
2. to cause to become physiologically or psychologically dependent on an addictive substance.
3. to habituate or abandon (oneself) to something compulsively or obsessively: Politicians addicted to raising taxes.

Ed Rendell has a problem. He's a tax addict. He can't control himself. He must spend other people's money. He has to raise taxes. He becomes physically ill if he can't raise somebody's taxes.

He's been doing it all his life, but his addiction has reached new levels since he became governor of Pennsylvania. In his first year in office, Rendell raised the state income tax by 10 percent. Then he ushered in legalized slot machines in Pennsylvania, a form of taxation. He also pushed Act 72 and Act 1 through the Legislature, both tax-shift schemes that have resulted in higher property taxes for Pennsylvania homeowners.

And like so many addicts in denial about their problem, Rendell keeps telling people he's delivered tax relief to Pennsylvania residents when everyone knows that's not true.

The governor is now pushing $2.5 billion in new or expanded taxes to balance his bloated 2007-08 general fund operating budget.

The real sign that Rendell has a problem was the $52 Emergency Services Tax the governor forced through the Legislature in 2004. It's not a lot of money, but it shows you the depths Rendell will go to separate Pennsylvania workers from their hard-earned pay.

The governor sold the tax as a way to support emergency services, hence the name Emergency Services Tax. Who would have a problem tossing in $1 a week to support local firefighters and ambulance services? The only problem is that the money never got to police, firefighters or ambulances.

Act 222 of 2004 amended the Local Tax Enabling Act (Act 511 of 1965) to permit municipalities and school districts (except the City of Philadelphia, the Philadelphia School District and the Pittsburgh School District) to impose on anyone working within the jurisdiction a combined Emergency and Municipal Services Tax of up to $52 a year beginning January 1, 2005. The new tax replaced the Occupational Privilege Tax municipalities and school districts were charging. The OPT was $10 a year. Almost every municipality in the state imposed the maximum $52 tax on workers once Rendell signed the EMS tax into law.

Municipalities were told they had to use the new EMS tax for police, fire or emergency services but it could also be used for road construction or maintenance or for the reduction of property taxes. (The limitation did not apply to school districts.) Guess what municipalities did with the tax? They put it into their general fund budget and neglected to fund police, fire or emergency services. It was another form of revenue for municipalities. Another tax increase on top of the property tax municipalities already charge. Not one community used the money for tax relief.

Rendell knew all this from the start. He didn't care. He needed a fix. He need to raise taxes. Even $1 a week was enough to satisfy Rendell's addiction at the time.

Fast forward two years and Rendell just signed a bill that would allow municipalities to deduct $1 a week from paychecks to collect the $52. The reason for the change? A lot of people were complaining that a $52 hit in their first paycheck of the year was too much. The high-paid politicians in Harrisburg can't relate to this, but $52 is a lot of money for the average worker, who already sees a big chunck of his payckeck going to taxes every week.

The revised tax bill that Rendell signed also exempts workers earning less than $12,000 from paying the $52 up front. (Before, workers had to file for refunds.)

The new bill will create a logistical nightmare for municipalities. They won't be able to collect the tax up front in January and they will have to guess who is exempt. Once again, the law of unintended consequences is at play here. A tax designed to help municipalities will end up hurting many communities.

The smartest thing to do is repeal the entire tax. But when was the last time anyone repealed a tax? Certainly not Ed Rendell.

The only good thing about the bill Rendell signed is that the governor finally came clean about the $52 tax. The name of the tax has changed to the Local Services Tax.

So as the Legislature continues debate the Rendell budget plan for the new fiscal year, the $27.3 billion budget that requires $2.5 billion in new or expaned taxes, keep the moral of the $52 tax in mind.

Rendell wants to raise taxes on tobacco products, gasoline, electricity and trash disposal services. He wants to tax employers so he can provide healthcare coverage to uninsured workers (as if Pennsylvania isn't doing enough damage already to small businesses).

You wouldn't invite an alcoholic to a bar for a drink. You wouldn't want a drug addict to get access to narcotics. So why would you supply an addict like Ed Rendell with more taxes?

Do Rendell a favor and get him on a 12-step program to kick his habit. In the long run, it will benefit all of us. Tell your legislators, "No new taxes."

I doubt you can break Rendell of his addiction but when it comes to taxes hopefully you can help make him at least a drier drunk.

Thanks for the link.

to see what is up at Azamatteroprinciple.