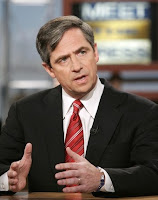 Don't look now, but The New York Times, the official state newspaper of the Obama Regime, is writing about the Joe Sestak "job offer" scandal, in which the Admiral claims the Obama White House offered him a top administration job if he would leave Arlen Specter alone.

Sestak didn't bite and ended up driving Specter into political oblivion in the May 18 Pennsylvania Democratic primary, much to the dismay of Barack Obama, who endorsed Specter.

But there is still that offer of a job in return for a political favor, which apparently is illegal.

From Peter Baker in the NYT:

WASHINGTON — For three months, the White House has refused to say whether it offered a job to Representative Joe Sestak to induce him to drop his challenge to Senator Arlen Specter in a Pennsylvania Democratic primary, as Mr. Sestak has asserted.

But the White House wants everyone who suspects that something untoward, or even illegal, might have happened to rest easy: it still will not reveal what happened, but the White House says it has examined its own actions and decided that it did nothing wrong. Whatever it was that it did.

"Lawyers in the White House and others have looked into conversations that were had with Congressman Sestak," Robert Gibbs, the White House press secretary, said on Sunday on the "Face the Nation" program on CBS. "And nothing inappropriate happened."

"Improper or not, did you offer him a job in the administration?" asked the host, Bob Schieffer.

"I'm not going to get further into what the conversations were," Mr. Gibbs replied. "People that have looked into them assure me that they weren’t inappropriate in any way."

Perhaps unsurprisingly, the "trust us" response from the White House has not exactly put the matter to rest. Though Mr. Sestak stayed in the race, and defeated Mr. Specter in the primary last Tuesday, the questions have returned with intensity and remain unanswered. Mr. Gibbs deflected questions about the matter 13 times at a White House news briefing last Thursday, while Mr. Sestak reaffirmed his assertion without providing any specifics about what the offer was or who made it.

"I was offered a job," he said on Sunday on the "Meet the Press" program on NBC. Asked if the post was secretary of the Navy, as many people in Washington assume since Mr. Sestak is a retired admiral, the candidate refused to say. "Anything that goes beyond that is for others to talk about," he said.

Republicans have happily pounced on the situation to undercut Mr. Sestak. "Nearly 100 days after he told voters about the alleged bribe that he received from the Obama administration, Joe Sestak owes Pennsylvanians a full explanation about this potentially illegal activity," said Amber Marchand, spokeswoman for the National Republican Senatorial Committee.

Read the full story, "For Sestak Matter, a 'Trust Us' Response From White House," at the newspaper's Web site.