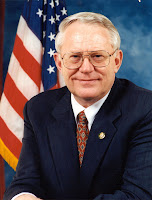 In the past year, there have been stark reminders of why our Armed Forces are engaged in foreign battles and why many have sacrificed their lives for our freedom.

The Christmas Day bomber nearly killed hundreds in the sky over Detroit. Just a few weeks ago, a terrorist trained in Pakistan tried to detonate a car bomb in Times Square. These attempts make it clear that terrorists are still plotting to use civilians around in the world and in the U.S. as targets. They hate free societies, and especially our own, the most free and prosperous nation in the world.

Indeed, today's battlefield is even being fought on American shores. Sadly, in the past year, we lost 13 of our fighting men and women and one unborn baby in an attack by a deranged Army officer who had embraced a radical Islamic ideology.

Those who lost their lives had come together from across the country to serve in our Armed Forces and for the cause of liberty. Their hometowns ranged from Spokane to Pittsburgh and they were both officers and enlisted personnel. Some were on their way to the battlefields in Iraq and Afghanistan, and others had just returned from overseas.

Unfortunately, Major Nidal Hasan chose to make Fort Hood, Texas, a battlefield. His attack was cowardly as none of his victims were armed. Despite having no weapon to defend himself, Capt. John Gaffaney charged Hasan during the shooting spree but was mortally wounded. All 13 American soldiers died as heroes, even though they certainly did not expect to fight within their own home base.

The terrorist attacks and attempts here at home reinforce the need for our military to root out our enemies overseas. It reminds us why our soldiers are fighting al Qaeda and other terrorist organizations in Iraq, Afghanistan and around the world.
From their bases in Afghanistan, with the full support of the Taliban government, al Qaeda was able to plan and execute the attacks on September 11, 2001. These attacks are not ancient history, but we must not forget what a dedicated terrorist organization can do when they have safe haven and the tacit support of a government.

In the coming weeks, our troops will undertake a campaign to root out the Taliban from Kandahar, the site of the Taliban's first successful military campaign in 1994. As their virtual capital, Kandahar serves as a major stronghold for the Taliban. This is expected to be the most difficult phase of the new strategy in Afghanistan.

Some question the need for our fight in Afghanistan and, instead, call for negotiation with the Taliban. I believe it is dangerous for us to consider withdrawal or compromise as long as the Taliban embrace international terrorism.

Our success during the surge in Iraq went hand-in-hand with the Anbar Awakening, a movement in which domestic Iraqi groups chose to disassociate from al Qaeda in Iraq. Only after their rejection of terrorism, were we able to work with the Anbar groups to work toward a more peaceful society.

I visited Afghanistan shortly after U.S. forces initially secured the country in 2002. I met with women and children who were brutally oppressed by the Taliban. I witnessed girls eagerly attending school for the first time, delighted by the opportunity to learn and flourish in a freer society. It is my firm belief that we should not abandon the people of Afghanistan to the terrorists who brutalized the country for many years.

The Taliban hope that our resistance to their rule will crumble, but I know that we have dedicated men and women who will stay until we have achieved security for the people of Afghanistan and for our families here at home. They have strong examples of American troops gone before them who fought against persistent and stubborn enemies and returned home victorious.

This Memorial Day we remember those who gave their lives so that we can enjoy freedom. We also think about those who are in harm’s way and pray for their safety and for their families here at home. For those families who lost loved ones the war never ends. We will enjoy that freedom with barbeques and swimming pools, but we must also take the time to honor those who have given the full measure so that we can enjoy the fruits of liberty.