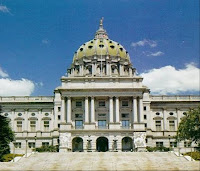 Denial is not just a river that runs through Egypt. It's a way of life along the banks of the Susquehanna River, where a professional class of politicians continue to burn through $300 million dollars a year in tax money.

A 34-page report by a grand jury outlining massive public corruption within the Pennsylvania Legislature has been met with predictable response from the very same Legislature: Denial.

From a story in today's Philadelphia Inquirer:

Leaders there said the report does not reflect the legislature of today - one that has made a number of changes in its rules and operations to address some of the ills that grand jurors detailed in their scathing report released Monday.

The report said the General Assembly lives in a " 'time warp' of public corruption" and needs to cut staff, institute term limits, and go part-time, among many other changes. It was written by the grand jury impaneled two years ago by Attorney General Tom Corbett's office to investigate corruption, including the so-called Bonusgate scandal.

Brett Marcy, spokesman for House Majority Leader Todd Eachus (D., Luzerne), said of the jury's findings: "It seems to be based largely on perceptions of the past and incorrect assumptions about the legislative process, rather than an accurate reflection of today's legislative operations."

Steve Miskin, spokesman for House Minority Leader Sam Smith (R., Jefferson), said there was a keen awareness among most lawmakers that the public mistrusted government. He noted that the House GOP had pushed a package of bills aimed at making the legislative process more open and accountable. "This report is a time warp," said Miskin. "It was a picture of the legislature a few years ago."

That is, said Harrisburg-based activist Tim Potts, exactly the response he expected to hear.

Potts, cofounder of the group Democracy Rising Pennsylvania, said his and other advocacy groups have pushed for years to get the legislature to reform itself, shrink its ranks, and open up its finances to public inspection. He said that after the outcry over the pay raise that legislators approved for themselves in 2005, they made changes to their operations. But Potts, a former legislative aide, called those "window-dressing."