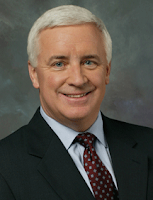 For the first and possibly only time in my life, I find myself agreeing with an editorial in ultra-liberal Philadelphia Inquirer.

Commenting on the recent move by the Republican candidate for Pennsylvania governor, the newspapers says, "Attorney General Tom Corbett needs to develop a thicker hide if he wants to be governor."

Corbett gave his Democratic opponent, Dan Onorato, ready-made ammunition for a negative campaign ad with his bonehead move to go after critics. Whoever is advising Corbett's campaign should be jettisoned immediately. This is Corbett's race to lose, and so far, he's fallen flat on his face.

Corbett, the GOP nominee, used a grand jury subpoena in an attempt to learn the identities of two anonymous bloggers who have been among his harshest critics on the Internet. This stunt smacks of an abuse of a prosecutor's powers for political gain.

"We know people like Brett Cott are on the blogs all day, making stuff up," Corbett told the Associated Press last year.

Whether they're making up stuff or not, even people facing criminal charges have a right to air their views, about everything from perceived injustice to the quality of last night's cheesesteak. Using the machinery of the criminal-justice system to unmask blogging shows that the attorney general has a thin skin and, worse, poor judgment.

After the judge gave Cott a longer sentence than Corbett had requested, the Attorney General's Office said it will no longer pursue the subpoena because the issue is "moot."

But the episode is still highly relevant for voters, who should consider how a Gov. Corbett would tolerate criticism, and whether he knows when to back off the levers of power.