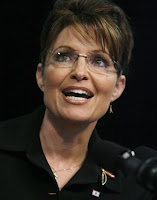 Liberals (and their media allies) underestimate Sarah Palin at their own risk.

She wasn't running for anything in 2009 but still managed to raise more than $2 million for her Political Action Committee.

Palin will be a major player in upcoming elections ... right up to the 2012 presidential race.

Sarah Palin raised $2.1 million through her political action committee in 2009, POLITICO has learned, putting the former Alaska governor's take on par with those of her potential 2012 Republican presidential primary contenders.

Palin took in $1.4 million of her total in the last 6 months of the year, after she resigned as governor on July 3. Heading into 2010, SarahPAC, had $900,000 in the bank after contributing $64,600 to dozens of candidates and beefing up its staff from just a handful of operatives.

"We are thrilled," said Meg Stapleton, a senior advisor and spokeswoman for Palin. "Common sense Americans know the direction we need to take this country and that Sarah Palin will be instrumental in taking us there this year. We look forward to the journey ahead!"

Palin's money came predominantly in small donations through the PAC's Web site and a handful of fundraisers. No direct mail solicitations were made.