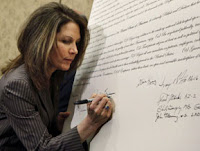 The only thing missing was quills and powdered wigs.

Eleven House conservatives on Wednesday signed a "Declaration of Health Care Independence" at an event staged by Rep. Michele Bachmann (R-Minn.), and there was no shortage of Revolutionary War rhetoric and tea party references.

Rep. Todd Akin (R-Mo.) compared Scott Brown's victory in Massachusetts last Tuesday to the battle of Lexington in April 1775. The congressmen signed their names at the bottom of the so-called declaration, which had been printed in a small font to mirror Thomas Jefferson's calligraphy.

Rep. Trent Franks (R-Ariz.) noted that the signers of the original Declaration of Independence put their lives and property at stake. The Republicans who signed Wednesday afternoon appeared to be in no grave political danger, since they all have fairly safe seats.

"Last week Massachusetts fired another shot that was heard round the world," Akin said. "Each of those shots were followed by various declarations. … The shot has been fired now twice in Massachusetts, and this is a declaration."