Obama vs. The Constitution 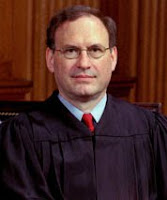 Can you believe Obama taught Constitutional law? I'm not sure this guy has ever read the Constitution. The Wall Street Journals said Justice Samuel Alito wins the oral, and factual, argument over campaign finance laws that the court recently struck down.

From a WSJ editorial:

In the case of Barack Obama v. Supreme Court of the United States, that was some oral argument on Wednesday night. With the Justices arrayed a few feet in front of him in the House chamber, President Obama blistered their recent decision defending free political speech for corporations and unions. As Democrats in Congress and Cabinet members rose and applauded around them, the Justices sat stern-faced, save for Samuel Alito, who was seen shaking his head and mouthing the words "Not true."

We're not among those who think the Supreme Court is above criticism. Especially in recent decades as the judiciary has become more political, and has encroached on the powers of Congress and the executive, politicians in the other branches have an obligation to defend their powers. Mr. Obama may have exhibited bad manners in sandbagging the Justices without warning on national TV, but he has every right to disagree with their rulings.

But could a graduate of Harvard Law School at least get his facts right? "Last week, the Supreme Court reversed a century of law to open the floodgates for special interests, including foreign corporations, to spend without limit in our elections," Mr. Obama averred. "Well, I don't think American elections should be bankrolled by America's most powerful interests, or worse, by foreign entities."

The longer this president serves he exhibits his incompetence. The so called Harvard law professor doesn't have the street smarts of the common thug. (ie keep your mouth shut)
In the Gates incident he called the Cambridge Police stupid without knowing the facts later he apologized. In the Fort Worth massacre he warned the country about jumping to conclusions without knowing the facts. The assassin was walking around in Islamic grab, making anti American statements and communicating with a known jihadist via the internet. Yet, refuses to call it an act of terrorism. Now he is commenting on a recent Supreme Court decision which he and his speech writers have no idea what the decision really states.
Incompetency runs rampant in the administration and in all honesty I can't say that if we elected his oppoents we would be any better off. Where do we go from here?