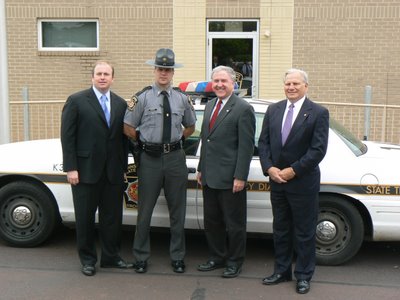 The photo above was taken in front of the State Police Barracks in Skippack after the barracks re-opened on a full-time basis, staffing around the clock for the first time in years. The new 24/7 operation is due in part to state Sen. John C. Rafferty Jr. (R-44), state Rep. Bob Mensch (R-147) and state Rep. Matthew Bradford (D-70) who pushed to reverse a cost-cutting move to institute a pilot program in which the State Police began closing the Skippack barracks for 16 hours every weekday and all weekend. Pictured left to right are Rep. Matthew Bradford, State Police Lt. David Buckley, Sen. John C. Rafferty Jr. and Rep. Bob Mensch.