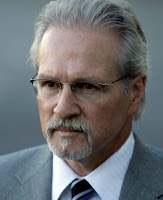 Less than a week after a district judge threw out the case citing a lack of evidence, Pennsylvania Attorney General Tom Corbett has refiled corruption charges against former state Rep. Mike Veon, the onetime No. 2 Democratic leader in the state House of Representatives.

This time, Corbett wants a real judge -- someone on the Dauphin County Court of Common Pleas -- not a district justice -- to hear the case.

That makes a big difference. District judges are elected locally and do not have to have any legal background. (In two local races for district judge in the Pottstown area, a hairdresser and a landscaper were on the ballot.)

The attorney general's office also asked for the proceedings against former Beaver County Rep. Mike Veon and his district office supervisor, Annamarie Perretta-Rosepink, to be heard by a Dauphin County Common Pleas judge.

District judges often make bad decisions and the AG obviously believes Harrisburg District Judge Joseph Solomon was over his head in one of the biggest corruption cases brought against a powerful political figure.

Mike Veon and his district office supervisor, Annamarie Perretta-Rosepink are accused of illegally diverting taxpayer dollars through the Beaver Initiative for Growth, a nonprofit agency he controlled, to hire consultants, rent office space and handle various political and legislative chores, according to The Associated Press.

They are both charged with theft, misapplication of entrusted property, conflict of interest and conspiracy, the wire service reports.

From The Associated Press:

"It is clear from (his) comments that he expected the commonwealth to present 'conclusive' evidence or proof of guilt beyond a reasonable doubt," wrote Senior Deputy Attorney General Anthony Krastek. "This is contrary to the well-established standard applied to preliminary hearings."