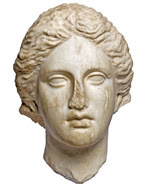 To commemorate the 50th anniversary of independence for the Republic of Cyprus, a special exhibit, "Cyprus: Crossroads of Civilizations," will open at the the National Museum of Natural History, Smithsonian Institution, in Washington, D.C., in September.

The exhibit will feature more than 200 rare artifacts (sculptural figures, jewelry, metalwork, ceramics, and paintings) from the country's 10,000-year-old history.

Ranging from 10,000 B.C. to 1803 A.D., the approximately 220 objects presented in this exhibition are but a fraction of the artifacts discovered by Cypriot and foreign excavators, including many American archaeologists, according to International Arts & Artists.

Ranging from objects of the earliest villages to masterpieces of medieval religious art, this exhibition presents an overview of the unique culture of Cyprus to the North American public for the first time, according to IA&A.

'Cyprus: Crossroads of Civilizations' to Open at Smithsonian in September