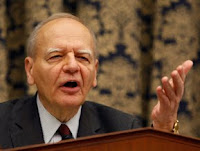 Kanjorski who has represented Pennsylvania's 11th Congressional Cistrict since 1985, may have run one too many times for re-election.

Kanjorski, who is bordering on senility, has done it again, making disparaging remarks about minorities.

Speaking before the committee, which is trying to reconcile the House and Senate reform bills, Kanjorski appeared to imply that "minorities" are not "average, good American people."

Kanjorski, who chairs the House Financial Services Subcommittee on Capital Markets, said, "We're giving relief to people that I deal with in my office every day now unfortunately. But because of the longevity of this recession, these are people — and they're not minorities and they're not defective and they're not all the things you'd like to insinuate that these programs are about — these are average, good American people."

Kanjorski went on to add that, "Most of them have been veterans, have served, have worked all their lives. But they are not full of money. They live paycheck to paycheck, and they always will because they are in the lower margin of our society."