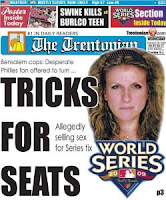 She says it right on her blog: Her 15 minutes of fame were not enough.

The suburban Philadelphia woman charged with prostitution after she allegedly offered undercover cops sex in exchange for Phillies World Series tickets, has launched a blog to share her fantasies about the Phillies.

(She was found not guilty in court of the most serious charges but was sentenced to one year probation).