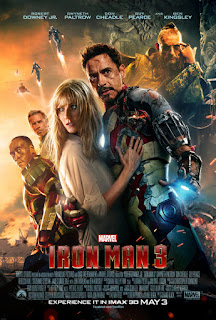 Moviegoers can't get enough of Tony Stark/Iron Man. The third installment of the Marvel comic book franchise earned $175.3 million from 4,253 theaters in North America over the weekend

Only "The Avengers" had a bigger opening weekend at the domestic box office: $207.4 million. And in case you haven't seen it, "The Avengers" also features Iron Man prominently.

Why is Iron May 3 such a smash?

Ray Subers at BoxOfficeMojo.com has an interesting theory?


Iron Man 3's $175.3 million debut is a huge leap over Iron Man 2's $128.1 million. That's a remarkable achievement given the dodgy history of three-quels — nearly all of them decline from their predecessor — and Iron Man 2's questionable reputation. The main reason for this is simple: audiences viewed Iron Man 3 more as follow-up to The Avengers, which is almost universally beloved, than as a sequel to Iron Man 2.

The Avengers was a cultural phenomenon, though, and it took an exceptional marketing effort from Disney to retain so much of that movie's audience. The centerpiece of the campaign was the destruction of Stark's Malibu home, which managed to up the personal stakes while also showcasing some impressive action. The marketing also emphasized Stark's conflict with the elusive Mandarin, which is typically a good strategy with superhero movies (a hero is most interesting when juxtaposed against a strong villain). Add in a marketplace devoid of competition, and this was a perfect recipe for a blockbuster opening.