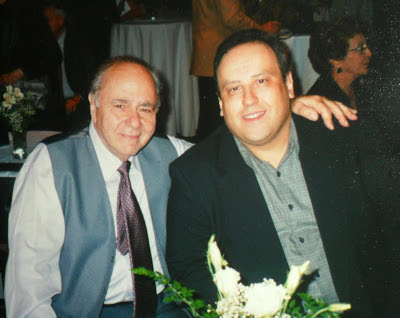 Birthday wishes to actor Michael Constantine, who turns 86 today. The co-star of the smash hit  movie "My Big Fat Greek Wedding" is a Reading, Pa., native and a member of my church, Sts. Constantine & Helen Greek Orthodox Church in Reading. The photo above was taken a church fundraiser that both of us attended a few years back. Michael Constantine has been a fixture in television and movies since the 1950s. "My Big Fat Greek Wedding" remains among the Top 100 all-time box office hits. His best-known television role came in the series "Room 222," which ran on ABC from 1969 to 1974. The role of principal Seymour Kaufman earned Constantine an Emmy Award in 1970.