Guest Column: Giving Thanks In America 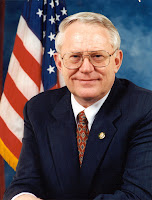 Giving Thanks in America

While we typically associate the Pilgrims in Massachusetts with the first American Thanksgiving, the first recorded day set aside for thanks was decreed in the Virginia colony in 1619. The settlers recognized the day their ship landed in the new world as an annual day of thanksgiving to God for a safe journey.

Two years later the settlers at Plymouth Colony would commemorate their first Thanksgiving. Our nation's early history is filled with religious and civil observances of thanks — from annual recognitions of a good harvest to General Washington’s declaration following the battle of Saratoga.

Our nation has always had so much to be grateful for. We have been blessed with a rich and beautiful country, with a government directed by the American people, and with courageous individuals who stand up and protect our liberty.

When the early English settlers first came to America, they hoped to find rich deposits of gold and silver to rival Spanish colonies. The original colonies were not rich with jewels and precious metals, but they were abundant in farmland, fish and game. These rich lands have made our nation the breadbasket to the world.

Later, our nation was able to take full advantage of the Industrial Revolution because of plentiful energy resources: coal, oil and natural gas. At the same time we appreciate the natural beauty of our forests, mountains, and wetlands. Today, we must concentrate on responsibly developing resources to protect the natural gifts given our nation.

Especially in an election year, we must give thanks for a constitutional government that is directed by the American people. It's easy to forget that fair and free elections are actually the exception and not the rule. In Burma, the ruling military junta recently held a sham election where it disqualified the political party of the Nobel Peace Prize winner, Aung San Suu Kyi.

Our recent election saw a number of incumbents defeated. Right now, these Members are moving out of their offices on Capitol Hill. Every single one of them is peacefully transitioning to their political opponent. Come January, Speaker Nancy Pelosi will hand the Speaker's gavel over to Republican Leader John Boehner. Just a few years ago, it was Boehner who was handing it to Pelosi.

We should be grateful that our country settles differences at the ballot box. For all the harsh words spoken before elections, we share a common recognition that power should not be achieved or maintained through violence. Sadly, this does not hold true in many nations.

Because there are enemies of freedom who seek to settle arguments with violence and terrorism, we need brave young men and women to take up arms in defense. We are grateful for our service members and veterans, especially those who are serving far away this Thanksgiving.

The recent Medal of Honor ceremony reminded us all about the sacrifices being made in Afghanistan right now. Staff Sergeant Salvatore Giunta was honored for the incredible bravery he showed when his squad came under attack from the Taliban.

Giunta acted quickly to help two wounded teammates and then ran into enemy fire to rescue another wounded colleague who was being dragged away by two insurgents. At the White House ceremony awarding him the decoration, Giunta accepted the award with the utmost humility, recognizing the efforts of his squadmates and the families of those who didn't survive the battle.

Because of brave military personnel working around the globe, we are able to enjoy liberty and prosperity. We must be thankful for those willing to put their life on the line to defend our nation.

God has granted us many good gifts here in the United States: a bountiful and beautiful country, a democratic and peaceful government, and individuals serving to protect our nation. It is only proper that we express our gratitude as we gather with family members over the holiday.