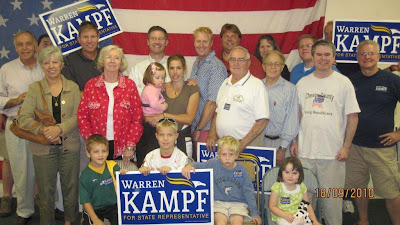 From the Warren Kampf for State House Campaign:

"Our old space simply was not big enough to accommodate the volunteers and supporters who continue to join our campaign every day," said Kampf. "The outpouring of support I have received throughout this process is humbling, and I hope that I can repay it by getting to Harrisburg to instill real fiscal discipline and get our economy back on track."

Kampf is running on a record of proven fiscal responsibility. As a Tredyffrin Supervisor for nearly seven years, Kampf has delivered four no-property tax increase budgets and held total tax increases to less than 1% a year on average during his tenure.

Kampf has also reduced township debt to save taxpayers at least a quarter of a million dollars a year in debt service payments.

In 2009, Kampf led the successful effort to cut government spending by 15%.

He has done all this while continuing to provide citizens with needed services and nearly tripling funding for emergency responders and fire departments.

"The differences in this election couldn't be more clear," said Kampf in a short speech given at the grand opening. "I have brought real fiscal discipline to government. My opponent has voted to raise spending by a billion dollars and increase debt by more than half-a-billion in the worst economy in generations."

After his speech, Kampf worked with volunteers on various projects. He then left the celebration early to continue his door-knocking effort that has seen him visit nearly 8,000 homes already this year, but more than 30 volunteers stayed to help stuff envelopes, prepare literature drops and more.