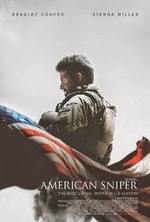 From Ray Subers at BoxOfficeMojo.com:

This the largest single day ever in January; the previous record belonged to Avatar, which took in $25.8 million on January 2nd, 2010.

With great word-of-mouth ("A+" CinemaScore), Sniper should play well through the rest of the weekend. Even if it takes a big drop against tough competition from the NFL conference championship games on Sunday, it should still wind up over $80 million for the three-day weekend.

If it plays like past Martin Luther King, Jr. weekend releases Contraband and Jack Ryan: Shadow Recruit, it will reach $100 million on Monday.

That means "American Sniper" will earn back double its production costs on its opening weekend. It's also on track to become director Clinton Eastwood's biggest all-time box office hit, surpassing 2008's "Gran Torino," which earned $148 million. No mean feat for the 83-year-old actor/director whose career in films spans nearly 50 years.