AHEPA Calls for Removal of Turkish Troops from Cyprus; Movement on Confidence-Building Measures 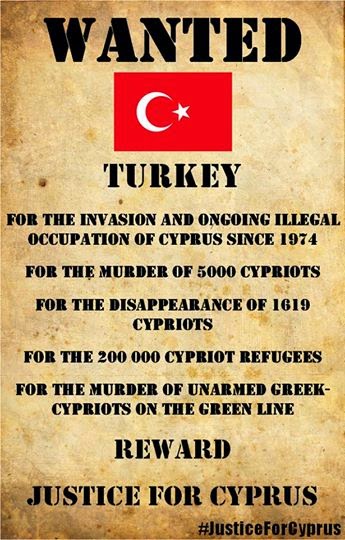 WASHINGTON, DC - Supreme President Anthony Kouzounis issued the following statement on the 40th anniversary of the illegal invasion and subsequent occupation of the Republic of Cyprus by Turkey that occurred July 20, 1974:

"Today we ask, 'How long?' as we mark a somber day-the 40th anniversary of the illegal invasion and occupation of the Republic of Cyprus by the Republic of Turkey. This was, and remains to this very day, an intolerable act; one that is a gross violation of the rule of law, human rights, and democratic ideals. We pause to remember the innocent civilians who lost their lives and the thousands who went missing, including four American citizens whose investigations remain incomplete. The illegal invasion and occupation caused the displacement of 170,000 Greek Cypriot refugees who to this day are unable to return to their homes which is also a violation of human rights as determined by the European Commission on Human Rights. Moreover, Turkey's restrictions upon religious freedom and destruction of Cyprus' cultural and religious heritage in Turkish-occupied Cyprus have been well-documented by the U.S. Helsinki Commission, the Law Library of Congress, the U.S. Commission on International Religious Freedom, and several media publications.

"In February, the Republic of Cyprus and the Turkish Cypriots agreed to a Joint Declaration that provided the foundation for the resumption of settlement talks. Included in the declaration was a commitment 'to efforts to implement confidence building measures that will provide a dynamic impetus to the prospect for a united Cyprus.' Unfortunately, after a promising start, the return of Famagusta or movement on other confidence-building measures has stalled, demonstrating Turkey's intransigence. We hope that bridge-building measures such as the Good Friday service that brought Greek Cypriots and Turkish Cypriots together can serve as an inspiration going forward.

"We vigorously applaud the recent high-level engagement by United States government officials with the Republic of Cyprus, including Vice President Joe Biden's historic May visit and subsequent engagement by the vice president and U.S. Department of State and U.S. Department of Defense officials. We also laud the bipartisan action taken this week by U.S. Senator Robert Menendez, who chairs the Senate Committee on Foreign Relations, and U.S. Representative Ed Royce, who chairs the House Committee on Foreign Affairs. Together, they urged the Obama administration to increase attention to the goal of reunifying Cyprus in a joint letter.

"However, the key to a successful settlement rests in Ankara. We once again call on the U.S. government, as we do every year at this time, to convey a strong message to Turkey that it must provide the Turkish Cypriot community with the necessary freedom to negotiate a solution within the United Nations framework, and equally as important, that Turkey must play a constructive role in the movement of confidence-building measures and facilitate the removal of 40,000 of its troops from the island. Thus, on this somber anniversary, we again call on Turkey to begin the removal of its troops from Cyprus. These are troops that we contend would serve a better purpose, especially to NATO, in another theatre, as opposed to Cyprus, where there have been more than 17 million incident-free crossings by Greek and Turkish Cypriots.

"Therefore, we restate our call for a reunified Cyprus with a single sovereignty, single international personality and single citizenship; and with its independence and territorial integrity safeguarded as described in the relevant U.N. Security Council resolutions. We contend that such a solution is in the best interest of all Cypriots, and must emanate from Cypriots themselves without arbitrary timetables.

"We call for these actions in the best interests of the United States. A just and viable solution to the division of Cyprus will strengthen the eastern Mediterranean and bring peace and security to the region. This is especially important with the discovery of hydrocarbon reserves within the exclusive economic zones of the Republic of Cyprus and Israel by a U.S. energy firm. Furthermore, a just and viable solution will aid Turkey's candidacy to become a member of the European Union.

"Today, we say 40 years is too long. Our hope is that we will no longer need to observe this 'black anniversary,' but instead, celebrate the anniversary of a settlement. AHEPA remains committed to doing all within its power to keep the Cyprus issue in the public eye until a just and viable solution that benefits all Cypriots is realized."

AHEPA will remember the victims of Turkey's illegal invasion of the Republic of Cyprus with a Moment of Silence at the Opening Ceremony of its 92nd Annual Supreme Convention which will be held July 21, 2014. Also during the convention, AHEPA will host AHI Founder Eugene Rossides, a Life Member of AHEPA, for a presentation on his new book, "Kissinger & Cyprus: A Study in Lawlessness," on July 24, 2014.

AHEPA proudly participated at a "Rally for Cyprus" on Capitol Hill organized by PSEKA that marked the 40th anniversary of the Turkish invasion of the Republic of Cyprus, July 16, 2014. AHEPA Chairman of the Board and Past Supreme President Nicholas Karacostas, a refugee from Cyprus, and Executive Director Basil Mossaidis, represented AHEPA on behalf of Supreme President Anthony Kouzounis. Several Ahepans also participated as representatives of other Hellenic or Diaspora organizations. Philip Christopher, president, PSEKA, is also an AHEPA member and special advisor on Cyprus to the AHEPA National Cyprus & Hellenic Affairs Committee.

"We congratulate PSEKA for organizing an outstanding public awareness and advocacy event," Kouzounis added. "We pledge to continue to work with all organizations to ensure the Cyprus issue remains visible and that a just and viable solution for Cyprus and all Cypriots becomes reality."


Founded in 1922 in Atlanta, Georgia, to protect individuals from the evils of bigotry and discrimination, AHEPA is the largest and oldest grassroots association of American citizens of Greek heritage and Philhellenes with more than 400 chapters across the United States, Canada, and Europe. The mission of AHEPA is to promote the ancient Greek ideals of Education, Philanthropy, Civic Responsibility, and Family and Individual Excellence through community service and volunteerism.


For more information about AHEPA or how to join, please visit ahepa.org or contact AHEPA Headquarters, 202-232-6300.