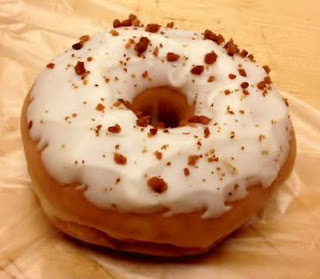 My neighborhood Sheetz store has introduced a maple bacon doughnut. I haven't tried it, but it stares at me form the display case every time I stop in for coffee. I may be wrong, but adding bacon to the sugary fried dough could be one of the signs of the Apocalypse.

Surprisingly, the maple bacon doughnut is only 350 calories, which is comparable with many other doughnut offerings at Sheetz, according to nutritional information posted on the company's website.

It has 16 grams of fat and 420 mg of sodium. So it's not exactly a healthy snack. (Something called a "Turtle Donut" is the worst offering in terms of calories and fat.)