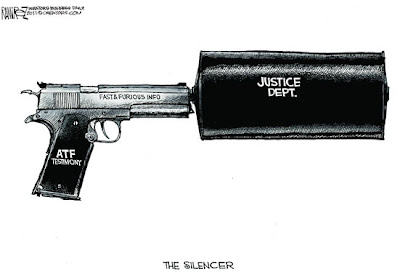 The attorney general says he and the president get criticized because they're African-American. He once said we need an honest discussion about race. OK, let's talk about him hiding behind his.

Times have changed since the evening of April 7, 1775, when Samuel Johnson said that patriotism was the last refuge of a scoundrel.

In the supposed post-racial era ushered in with the election of President Obama and the appointment of Attorney General Eric Holder, racism has replaced it as the ultimate defense against charges of incompetence and misguided policies.

In an interview with the New York Times published over the weekend, Holder accused those who want to know who authorized the Fast and Furious gun-running operation of being racially motivated.

The 60 congressmen, two senators, two sitting governors, and all the major presidential candidates who have openly called for Holder's resignation are not concerned in his view about how two U.S. agents and hundreds of Mexicans got killed with U.S. guns.

No, according to Holder, they are motivated by the color of Holder's and President Obama's skin.

Read the full editorial at the link below: