'The Charge of the Light Brigade' 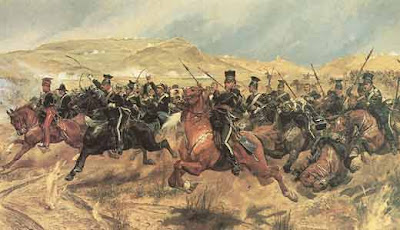 On Dec. 9, 1854, Alfred, Lord Tennyson's "The Charge of the Light Brigade" was first published in England. The poem comemmorates the Battle of Balaclava on Oct. 25, 1854, during the Crimean War. British light cavalry charged over open terrain against heavily-fortified Russian forces, leading to one of the worst battlefield massacres in history.

The Charge Of The Light Brigade

'Forward, the Light Brigade!'
Was there a man dismay'd ?
Not tho' the soldier knew
Some one had blunder'd:
Theirs not to make reply,
Theirs not to reason why,
Theirs but to do & die,
Into the valley of Death
Rode the six hundred.

Flash'd all their sabres bare,
Flash'd as they turn'd in air
Sabring the gunners there,
Charging an army while
All the world wonder'd:
Plunged in the battery-smoke
Right thro' the line they broke;
Cossack & Russian
Reel'd from the sabre-stroke,
Shatter'd & sunder'd.
Then they rode back, but not
Not the six hundred.