What the Gimme Got for Christmas! 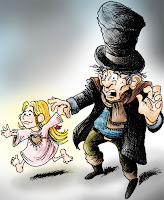 Carter Clews offers an instant Christmas classic in his tale of the Gimme posted at GetLibety.org, the Web site of Americans for Limited Government.

Here's how the story begins:

Once upon a time, not too long ago, in a land where each of us has often been, there lived a very strange, yet vaguely familiar-looking character. He was not too big, but not too small. Not too short, but not too tall. He had big, over-sized hands, a terribly undersized heart, and, I'm afraid, a very sour-puss face.

Yes, it was true. He was one of those terribly rude, often crude, rarely good creatures known as a Gimme.

This Gimme, as it turns out, lived in a big old mansion on the top of the town's highest hill. It was often said among the townspeople that the mansion at one time had been the grandest, happiest home in the village – cool in the summer and warm in the winter, with huge brick fireplaces that heated every room with the warm fragrance of burning, crackling logs.

Now, however, since Mr. Gimme had lived in the house, it was old and crickety, with such high grass and thick vines that it really resembled very strongly a deep, dark cave – with Mr. Gimme as its hermit.

And what a sad, grouchy old hermit Mr. Gimme was. He would yell, and he would holler, and he'd pinch every dollar 'til you’d almost hear the poor thing scream for help. It was said that when old Mr. Gimme went to the store to buy things, he'd never be polite, but would bark out angrily, "Gimme this and gimme that, or I'll hit you with my hat!"

Check out What the Gimme Got for Christmas! at GetLiberty.org