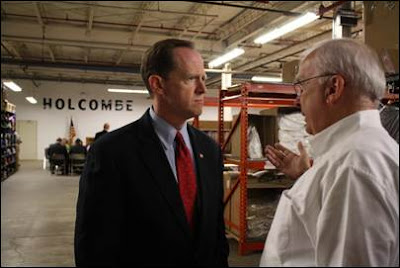 Sen. Toomey talks with Dick Holcombe, chairman and chief executive officer
of The Holcombe Group, during a visit to Sullivan County Tuesday.


With a visit to The Holcombe Group in Sullivan County Tuesday, U.S. Senator Pat Toomey (R-Pa.) has visited all 67 Pennsylvania counties since being sworn into office in January 2011.

“Since joining the Senate, I have traveled to every corner of the state listening to Pennsylvanians, and I’ve heard the same concerns again and again. Pennsylvanians are worried about our economy and paying their bills. They’re concerned about their jobs being threatened by excessive regulations and rising taxes,” Sen. Toomey said. “I’ll continue to travel across the commonwealth to hear what Pennsylvanians have to say and to inform my decisions in Washington.”