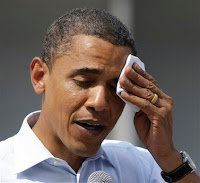 Even the liberal media that worked so hard to get Barack Obama elected in 2008 can't sugarcoat his disastrous presidency any more.

Public pessimism about the direction of the country has jumped to its highest level in nearly three years, erasing the sense of hope that followed President Obama's inauguration and pushing his approval ratings to a record low, according to a new Washington Post-ABC News poll.

More than 60 percent of those surveyed say they disapprove of the way the president is handling the economy and, what has become issue No. 1, the stagnant jobs situation. Just 43 percent now approve of the job he is doing overall, a new career low; 53 percent disapprove, a new high.