How state lawmakers pump up pensions 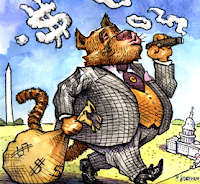 Notorious bank robber Willie Sutton once was asked, "Why do you rob banks?"

He had a straight-forward answer: "Because that's where the money is."

Fast-forward to 2011 and you could ask your favorite public servant, "Why do you run for office?"

The answer? "Because that's where the money is."

USA Today has published a scathing look at how politicians milk the system to collect millions in pensions.

In many cases, the politicians have qualified for benefits at the state level while moving on to higher office at the federal level, where they will once again reap the financial rewards of "public service."

More than 4,100 legislators in 33 states are positioned to benefit from special retirement laws that they and their predecessors have enacted to boost their pensions by up to $100,000 a year, a USA TODAY investigation found. Even as legislators cut basic state services and slash benefits for police, teachers and other workers, they have preserved pension laws that grant themselves perks unavailable to voters they serve or workers they direct.

Pennsylvania politicians are among the worst offenders, according to the investigation.

Since 1996, 67 retired Pennsylvania legislators have collected $7 million in pension checks that they could not have received if they' had the same retirement age as most state workers, USA TODAY found. Another 40 who took early retirement also benefited from the younger retirement age.

How state lawmakers pump up pensions in ways you can't – USATODAY.com