Dinniman: Why all the secrecy on Route 422 toll plan? 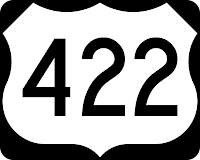 Last week, some 500 residents showed up at a public forum to express their opposition to plans to toll Route 422 in Southeastern Pennsylvania. A half-dozen Republican state lawmakers have also stated publicly they will oppose the tolling plan. Now, a Democrat has joined the opposition.

Pennsylvania State Sen. Andy Dinniman, D-19th Dist., has some concerns about a proposal to toll Route 422 in Montgomery County:

From an op-ed published in The Pottstown Mercury:

Pennsylvanians have a right to an honest, open debate on the issue. Unfortunately, such honesty and openness is questioned when the Delaware Valley Regional Planning Commission refuses to share information and then gives two conflicting answers as to why. Whether one is for or against the tolling proposal — and I am opposed to it — access to information is crucial to any public-policy debate.

Why all the secrecy on Route 422 toll plan? - pottsmerc.com