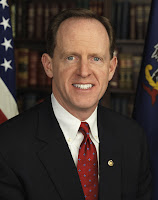 As the federal government hit its debt limit of $14.294 trillion today, U.S. Senator Pat Toomey (R-PA) is calling on the Obama Administration to "get serious about cutting spending, reducing our deficits and putting our country on a fiscally responsible path."

From a Toomey press release:

"Instead of offering ideas for cutting spending and enacting serious spending reforms, the administration has been engaging in scare tactics in an attempt to convince Congress to raise the debt limit without significant conditions attached. But the most irresponsible thing we can do is simply kick the can down the road and continue with business in usual in Washington. I have introduced legislation to make sure the United States will not default on our national debt. If the administration was truly concerned about defaulting on our debt, it would support the Full Faith and Credit Act which prioritizes paying the interest on our debt to avoid default. Now is the time for the administration and Congress to put aside the hyperbole and have an adult conversation about putting our country on a sustainable fiscal path."